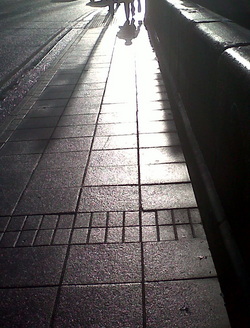 The Double Life of Catherine Street (2011) 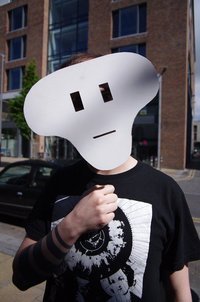 The Double Life of Catherine Street project is part of the Catherine Street Dig 2011.  The Double Life is a story of the uncanny, of imagined identity situated in a geographical location, conveyed through visual means, and located in invented narratives.  It takes a real street in Limerick and asks a simple question – what if this street had a doppelganger?    A team of 11 artists banded together with the street traders, the publicans, the café owners to construct ‘other’ narratives from multiple sources and record the outcomes of these through action research using photography, film, dialogue and performance.

So what was this other street?  The outcome were six myths; The Masked Ball, the Butcher’s Bride, the Secret History of the Republic, The Magic Bush, The Visit of the Queen of Iressia,  the tale of Miss Christy.  The stories were tied together with ‘umbrella’ identity projects.  The aim in all of these was to subvert trusted badges of identity and history in order to lead to a sense of fractured identity and dislocation in the spectator.  One such project was the Limerusian Gazette, another was the creation of historical plaques on strategic locations along the street and the final over-arching project was a direct reference to the ghostwalk/ghosttalk of 2010, a guided tour of the fictive history of the street.
Read more about the project at its dedicated web-site http://doublelifecatherinestreet.weebly.com/ 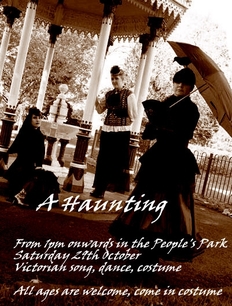 A Haunting was a site-specific piece which took place in the People’s Park Limerick on the 29th of October, created by gothicise in collaboration with Limerick City Council. A Haunting is a simulacrum, a deliberately artificial recreation; the name is a nod to Robert Graves’ short story A Haunting, based in Limerick.  This was a day-long festival in a Victorian park that attempted to recreate Victorian events and customs germane to the original park, but translated into a modern idiom - while also emphasizing the grainy, misty quality of memory and the passage of time by using projections, film, sounds and especially the revolutionary new technique of photography from this era.

The timing of the event was scheduled to mark Hallowe'en, itself an echo of the old Celtic festival of Samhain, a festival of the dead,.  It was believed that this was the most liminal point of the year, a time when the living and the dead could walk side by side, hence the tradition of 'guising', or dressing as spirits and ghosts; thought by some folklorists to be an attempt to confuse the spirits of the returning dead.


You can follow this project at its own web-site at ahaunting.weebly.com. 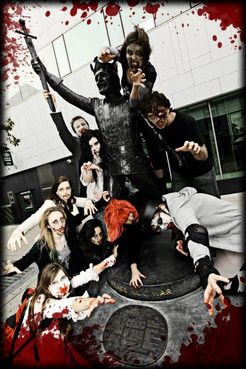 A collaboration with the Limerick zombie festival -  Outbreak Festival, to assist with the festival and to arrange the film premiere of Limerick-born Dermot Petty's 'Zombie Waltzing' and a showing of Return of the Living Dead, with introduction by film critic and writer, John G. Byrne.

Photograph by Ken Coleman.
The full Outbreak site is at http://www.outbreakfestival.com/
'Making Gothic; Or, How I Do What I Do (The Way I Do It﻿)' (2012)﻿ 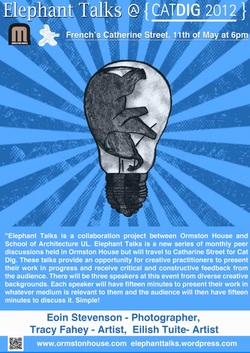 Gothicise was asked to contribute a talk to the Elephant Talks series organized by Ormston House in 2012 in conjunction with  CATDIG 2012.

This talk- Making Gothic; Or, How I Do What I Do (The Way I Do It) - was delivered on the 11th May 2012 by creative director of Gothicise, Tracy Fahey 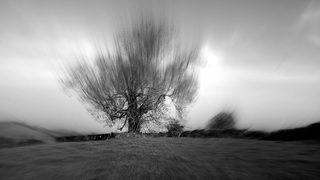 'Gothicise; Site Specific Gothic in Irish Fine Art Practice' (2012)
The paper  was presented by Tracy Fahey on the work of Gothicise at the international Studies in Gothic Fiction Conference, San Diego, California this international conference in March 2012. Read more about the conference here


'Gothic Locations; (Re)imagining Sites and Stories', World Academcy, UL (2013)
This was the first in a series of ‘Art Works’ seminars organized by the MA in Festive Arts at UL. This talk was delivered by Tracy Fahey of Gothicise. More details on it can be found here.


Gothicise Wired FM Interview (2014)
Tracy Fahey of Gothicise was interviewed by Louise Dooley of WIRED FM on the subject of Waking St. Munchin and Remembering Wildgoose Lodge. Listen to it here.


‘Remembering Wildgoose Lodge: Gothic Trauma Recalled and Retold’ (2015)
This paper was presented by Tracy Fahey at the Irish Studies and the Dynamics of Memory conference, Radboud University Nijmegen 31 March – April 2 2015.